Body Awareness The understanding of how your body is positioned in space, how your body is moving through space, and what your limbs are doing while moving in space. Body Awareness involves 3 systems that can be improved for optimum athletic performance: Vision (The Eyes), Vestibular (The Inner Ear) and Proprioception (Limb Awareness). Your dog’s vision will tell him how his body is oriented by what his eyes are seeing. His vestibular system will detect horizontal and vertical movement along 3 planes ( up/down, side to side, and back/forth). Proprioception alerts your dog to how he is oriented and what his limbs are doing by nerve signals in his joints, ligaments, tendons and muscles. 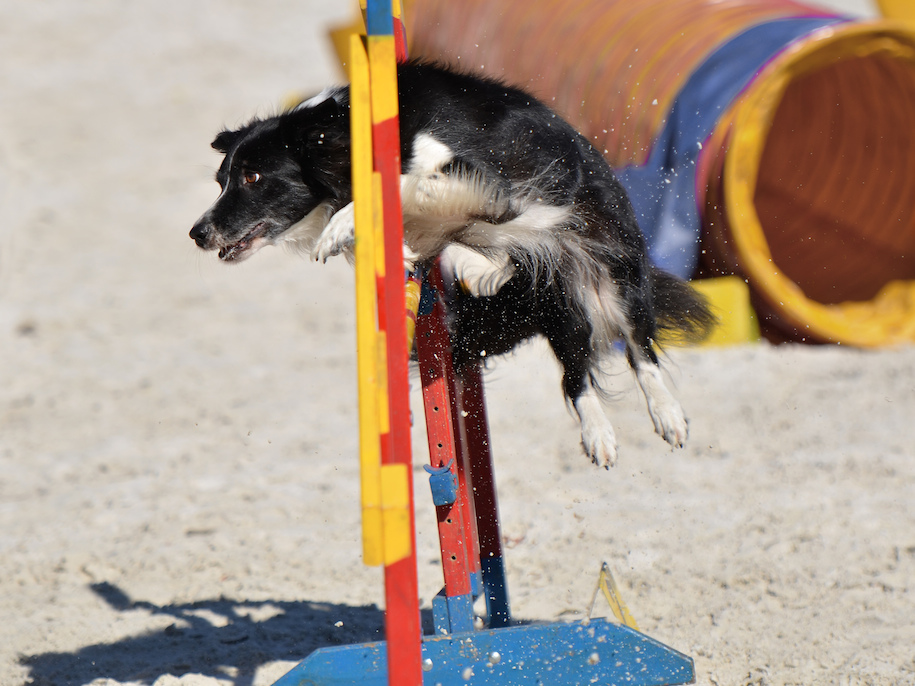 Improved body awareness improves performance, but also prevents injury. Knowing what your body is doing, and how it’s moving prevents tripping, falls, awkward landings, miscalculations and missteps among other things associated with a lack of athleticism.

For athletic performance we need to improve our dog’s vestibular and proprioceptive senses. Why? Because your dog will need her eyes to focus on the object or obstacle she is about to take. Think of a baseball player, like Derek Jeter, catching a ball and then continuing on to throw it to first base in one fluid motion.  Similarly, during an a competition, your dog’s eyes are focused on one thing, the next jump or the Frisbee, so she has to have an understanding of how her body is moving (left, right, up or down) to successfully perform the jump or how she is positioned (up side down, twisted or otherwise) to successfully catch the Frisbee, and she also needs to know what her limbs are doing (reaching, planting, pushing, turning) in order to not get injured,  all with little or no dependence on her eyes.

Balance Though body awareness is a significant part of being able to balance, we define balance and body awareness as two separate things. We define balance as a dog’s ability to maintain his body position against gravity with as little effort as possible. Balance must be found, and once found it must continually be challenged in order to improve. This is very different from simply standing on stability 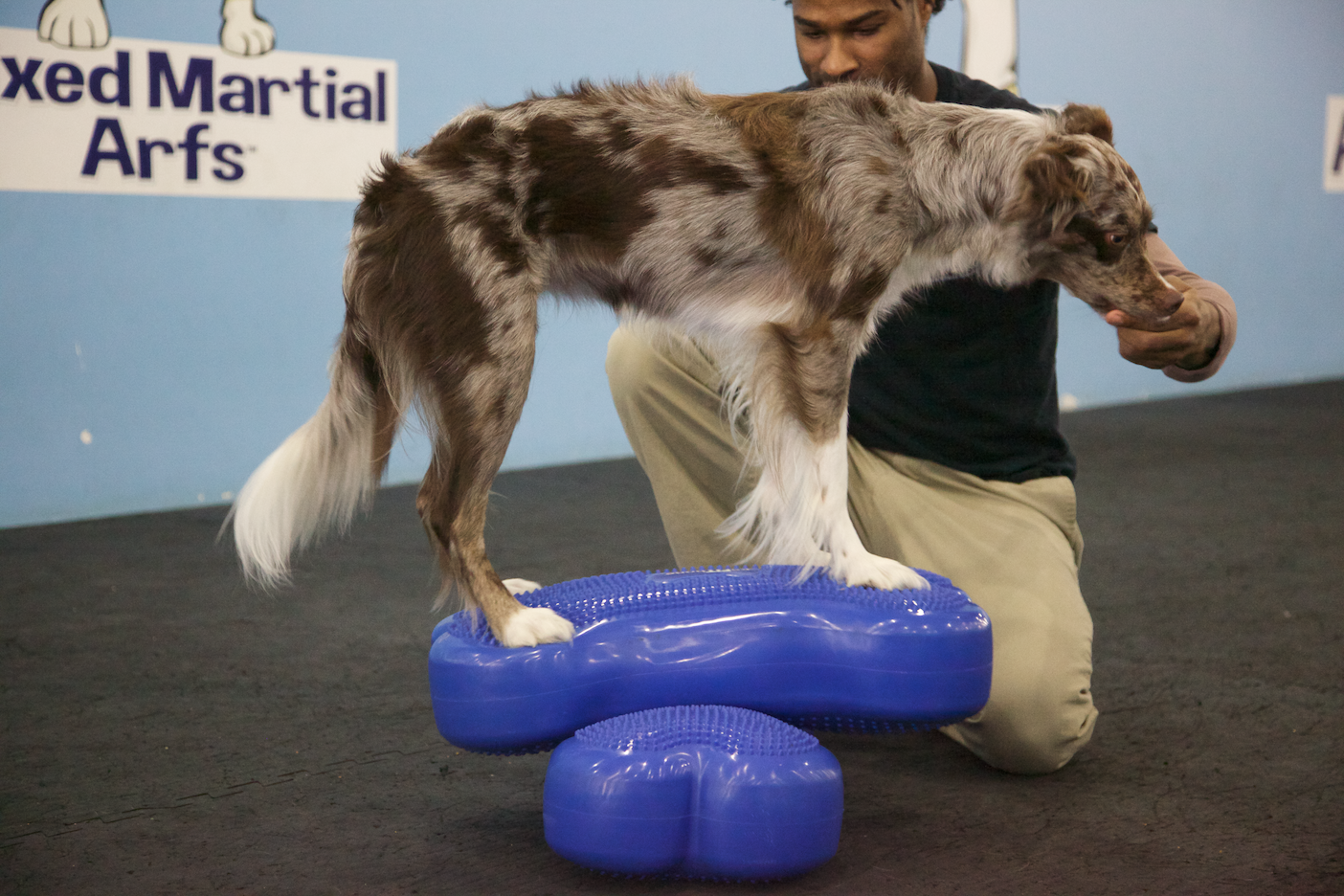 equipment. Given enough time, any dog will find his balance on any given stability set up. But that’s not the point. We train for function. So the point is to not simply have a dog stand but perform complex physical tasks while working to maintain balance.

If you’ve done any stability work with your dog,  you have seen him shake, sometimes vigorously, as he attempts to find a position that takes the least effort. Or he’ll be working to control the balance disc so that it remains as still as possible. Controlling the stability disc always takes more effort. This is why your dog is hesitant to get on it in the first place or will stand but then not want to move. Your dog’s ability to minimize the shaking, or in other words, learn to minimize the effort necessary to stabilize his body, or find the position that requires the least effort to maintain, is his ability to balance. Think of a gymnast holding a position on a balance beam. It looks effortless because they have found a position to balance. 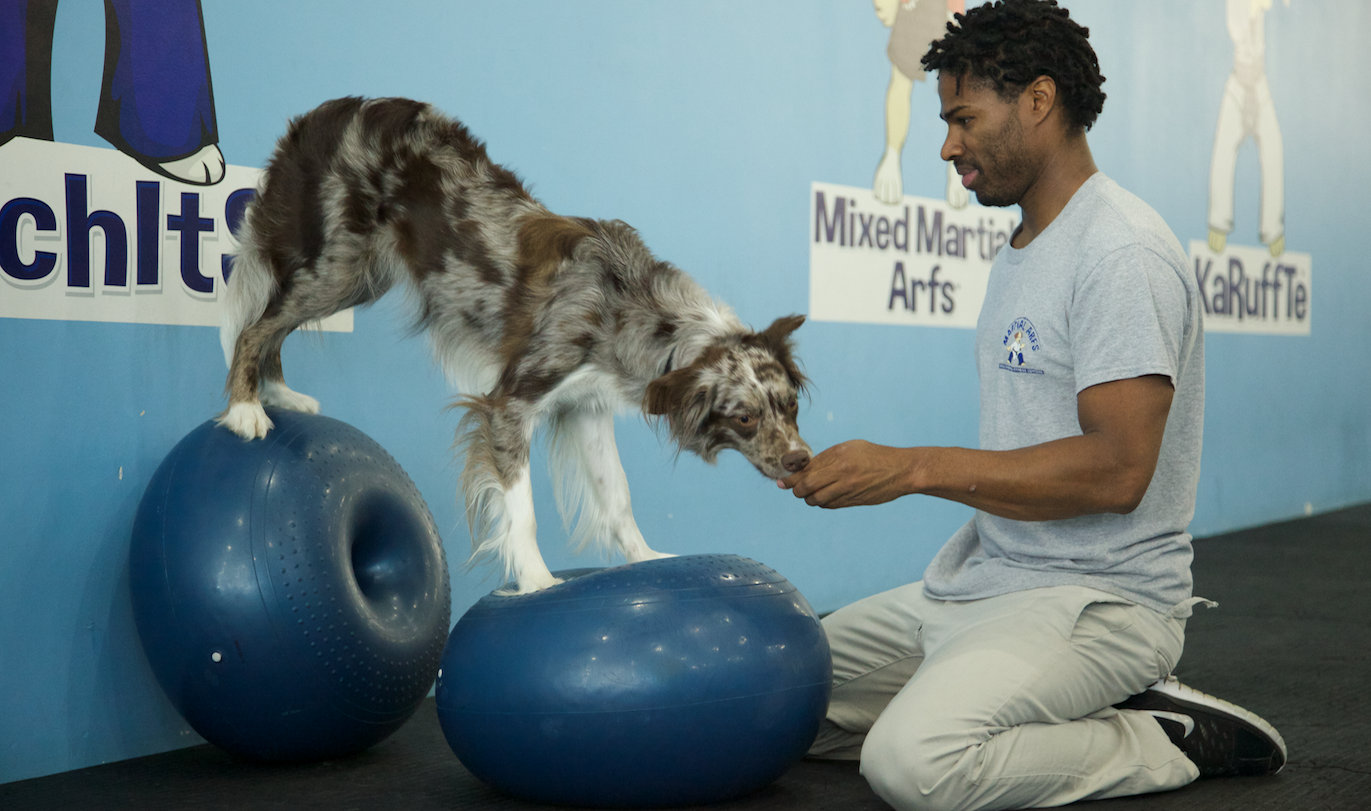 Since balance is about maintaining a position against gravity with as little effort as possible, the better a performance dog’s ability to maintain his balance while performing physical tasks, the more efficiently he can move. This more efficient movement will improve speed, power and performance but also help to maintain contralateral limb strength through even  weight distribution of  during movement.

energy from forelimb to forelimb, hind limb to hind limb, nose to tail) or forelimb(s) to hindlimb(s) and vice versa. The better a dog’s ability to smoothly transfer energy through his body the more speed and power he can generate.

As well, dogs have Eye-Mouth Coordination.  Eye-Mouth Coordination is your dog’s ability to move his mouth to catch or touch something that he sees.  An easy example of this is tossing a ball to your dog to catch.  A more complex application of this is a dog jumping to catch an airborne object like a Frisbee. Even more difficult, but a great eye-mouth training drill is to slightly move the object as your dog is jumping to catch it. This will force your dog to focus throughout the entire attempt because the object may not be where it started.

In addition to making coordinated movements within the body, your dog needs Eye – Paw Coordination, the coordinated movement between your dog’s eyes and your dog’s body is essential for sport and life. Essentially, this is your dog’s ability to move his paws in conjunction with what he sees. A simple example of this is teaching your dog the “Paw” Command. They have to see where your hand is and then place their paw in the same place. Many dogs simply swat at an owner’s hand with out taking their eyes off their owner.

Rhythm is the ability to perform sequences of coordinated movements at a speed or cadence dictated by an outside source or technique. The obvious example is a series of dance moves to a particular beat. But what about a series of jumps for your dog? How fast your dog goes over the jumps is the speed or cadence.  How smoothly they are able to complete each jump would be dependent on the rhythm they are able to create. Think: one, two, three, four, jump, one, two, three, four, jump. If you don’t teach your dog rhythm, she will develop her own. Like a baby dancing, or you uncle Larry, it may only be good for a few laughs at holiday gatherings. 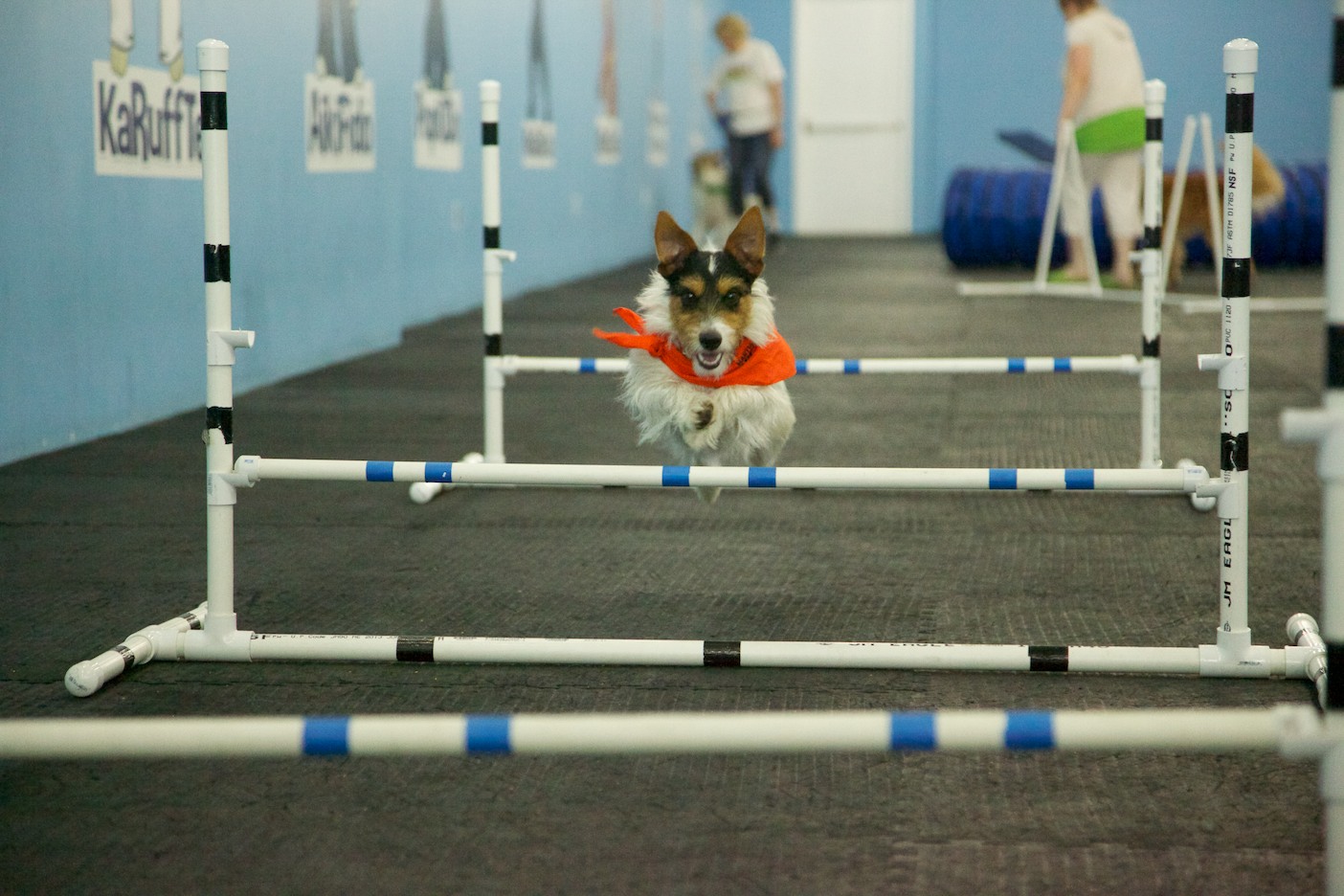 You can use a variety of activities and exercises to teach your dog Rhythm. As I mentioned earlier, jumps are one way.  A dog treadmill would be another. The speed of the treadmill is the tempo. Then a series of movements like….. Turn left, turn right, jump off, jump on. Repeat. Turn left, turn right, jump off, jump on. Even behaviors could develop rhythm. Sit, Down, Sit, Stand, repeat. Sit, Down, Sit, Stand. Sit, Down………., Sit, Stand. Sit………..Down, Sit, Stand. You could have a slow tempo, or a fast one. You could even change it up. The point is to improve your dog’s rhythm so much so that she will be the Fred Astaire of canine performance.

In order to improve athletic performance your dog must have: