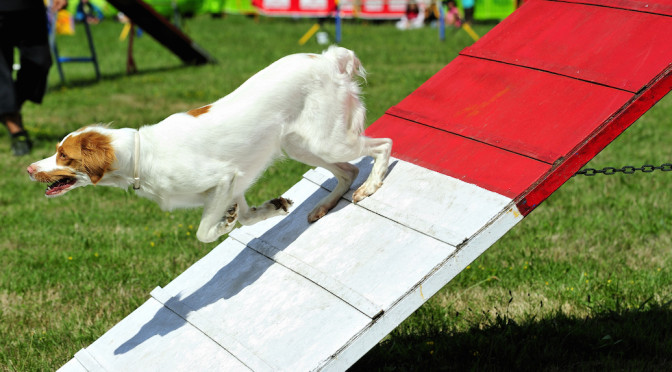 Each of the 4 elements are comprised of several key components that make up that element. Ignoring any component of any element ruins the integrity of the entire process and you will most likely never see the result you’re hoping to achieve. There are 4 components to developing a “functionally” more powerful canine athlete. They are: Strength, Stability, Flexibility, Connection.

Strength: The intensity at which a dog can contract its muscles. The stronger the muscle, the faster a limb can move. Therefore muscle strength is essential for athletic performance. However, a dog will almost always use it’s strongest or dominant limb in order to accomplish any given task. This imbalance will create further imbalance as stronger muscles get stronger and weaker muscles get weaker. This creates a recipe for injury. 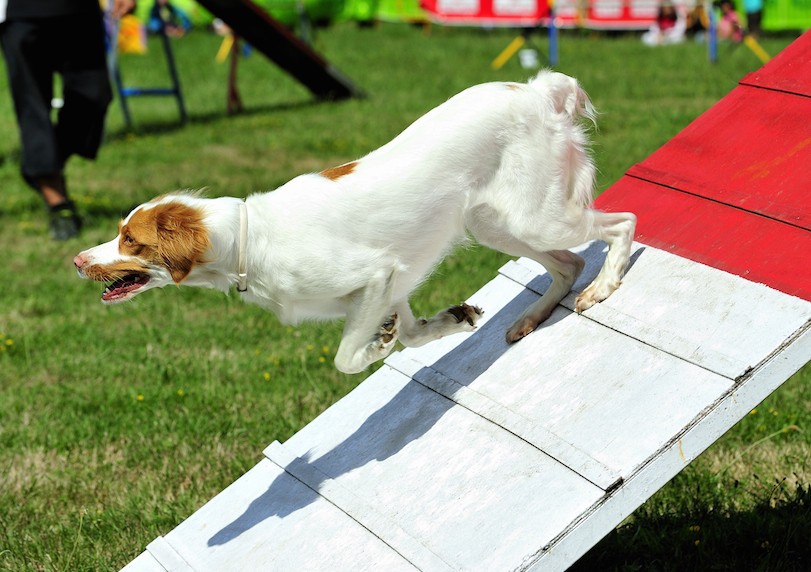 Muscle Strength must be developed equally between a dog’s contralateral limbs. Quite often, the more physically demanding a task the more effort used by the dominant limb. Simply telling a dog to “push harder with the other leg” will not work. Slow and/or controlled functional conditioning exercises are the best way to strengthen your dog uniformly. This will achieve not only strength, but balanced strength across your dog’s entire  body.

Stability: During any movement, we call the main muscles involved the “Primary Movers”. The muscles that hold the joint stable or limb in a desired plane of motion, we call the “Stabilizers”. It doesn’t matter the strength of the primary movers if the stabilizers are not strong enough to hold the limbs exactly as desired or support the joint during powerful athletic movement. 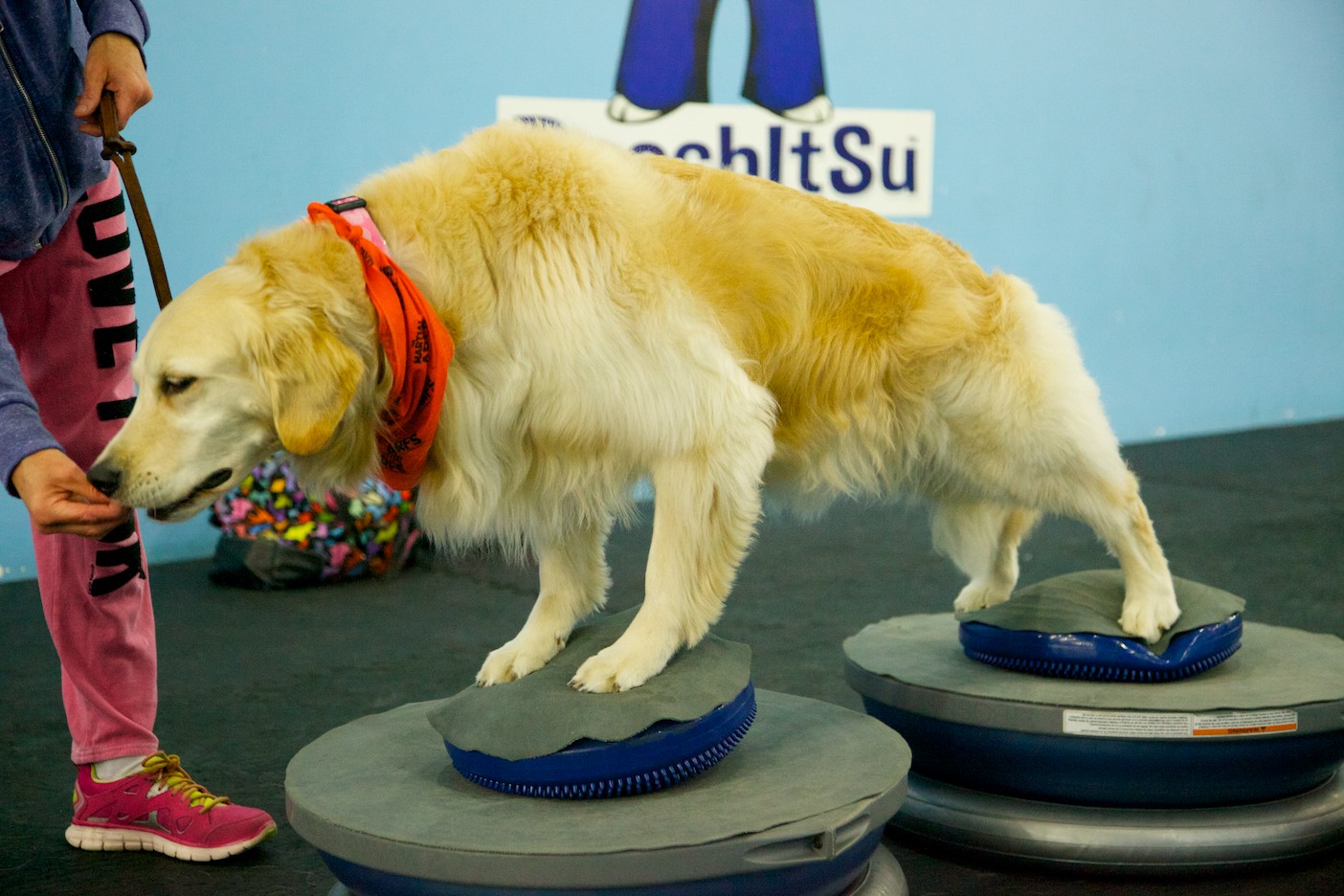 A powerful limb that cannot be controlled with equally powerful Stabilizers will lead to wobble, weakness and inefficient movement. Strong Stabilizers of the spine allow for increased body control, smooth transfer of power from hind to forelimbs, and protection against injuries associated with the repetitive movements of sport. In addition, strong stabilizers protect the spine, hips, knees, wrists, and elbows against the concussive forces of sport because they will absorb the shock so that the bones and ligaments do not.

Flexibility: A dog’s ability to move or extend their limbs, neck and spine throughout their full Range Of Motion (ROM). It is paramount for athletic performance and vitality. Like a plane rolling down the runway, speed builds over distance. Powerful, but tight hamstrings, quads, glutes, hamstrings or hips will decrease hind end extension, minimizing speed when running and jumping. Strong shoulder muscles, with a tight shoulder girdle will decrease forelimb reach limiting both jumping height and distance. Tight abdominal muscles and spinal extenders will impair spinal fluidity and adversely effect extension and flexion of the spine when running and jumping in addition to lateral flexion when twisting and turning.

In addition, muscles can be injured when they are stretched beyond their “normal” range of motion, which can be different than “full” ROM. For example, you might tear a muscle attempting to do a full split like a gymnast. However, doing a full split is the “Full” ROM for a human’s legs, but not your “normal” ROM. Just because you can’t do it, doesn’t mean it’s not what the body is designed to do.

In any given physical activity, especially sport, your dog may easily move a limb beyond it’s normal ROM. You must work to make sure that their “normal” ROM, is in fact, their “full” ROM.

Connection. What if your dog’s limb extends beyond its “Full” Range Of Motion? Increased range of motion requires increase strength at “Full” Extension for injury free powerful movement.  Any chain is only as strong as it’s weakest link. Strong muscles that pull limbs from weak attachments are ineffective and dangerous. Even worse, a fully extended limb creates additional stress on those same weak attachments. 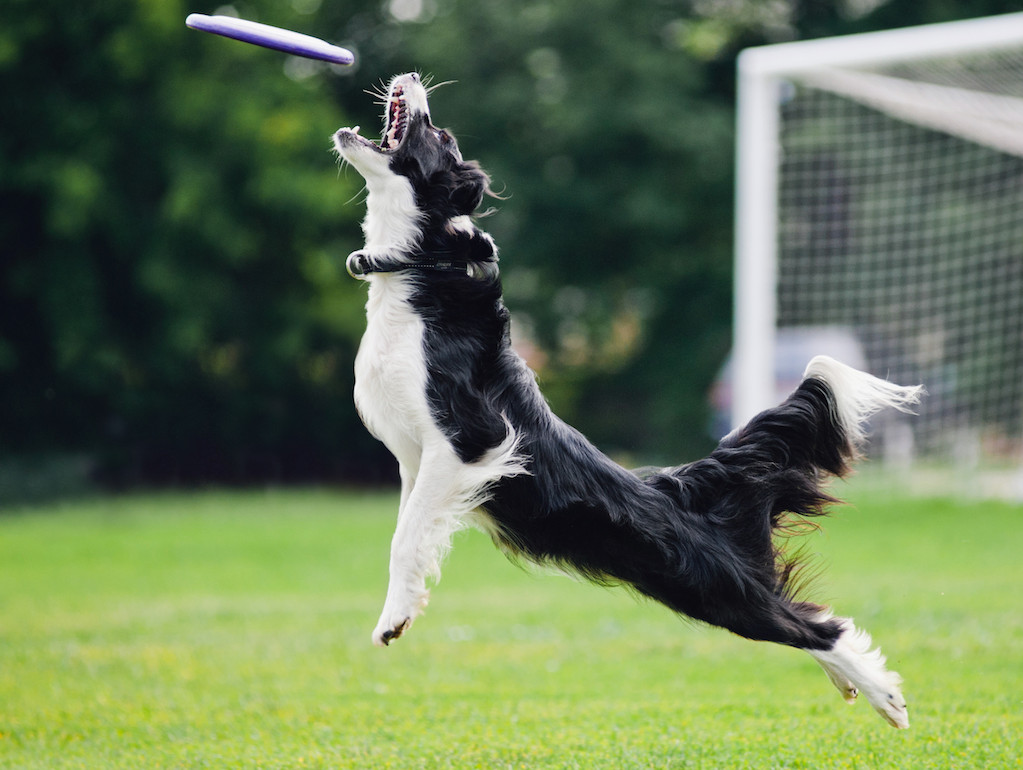 If you build the strength of your dog’s primary movers, but they have a disproportionate strength to the muscle tendon junction, they could in fact tear from the bone. If you increase your dog’s ROM without increasing the strength of the muscles where they attach to the bone, you increase the risk of injury to your dog. In other words, if the dog might have torn a muscle in the middle because it was too tight, now, with increased ROM, the that same muscle is susceptible to tears at the muscle tendon junction.

In order to achieve safe powerful movement, increased strength of the muscle to bone connection must develop in conjunction with the contractile force of Primary Movers and the increased Range Of Motion of any given joint or limb.

For an increase in Power, while working to prevent injury you must have: